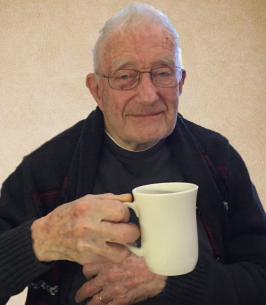 He was the son of the late Ralph R. and Mary V. (VanDyke) Haney. He attended school at East Wayne (now Jefferson Elementary) and graduated before joining the United States Army on December 14, 1942. He was enlisted at Baer Field, Fort Wayne and honorably served for more than three years. Having earned the rank of sergeant, he spent the majority of his time in Belgium. Bob was honorably discharged on April 20, 1946 from Camp Atterbury. He would return home before earning a bachelor’s degree at Manchester College.

It was while attending Manchester College, Bob would meet the woman with whom he would spend the next 69 years, Joyce King. The two were united in marriage on September 17, 1949 in North Manchester and eventually made their home in Winona Lake.

Bob worked in his parent’s dairy (The Winona Dairy) when he was young and later would retire from the United States Postal Service having served as the Postmaster of Winona Lake before transferring to the Warsaw office. After retirement, Bob took-up work assisting his wife’s grooming business, Joyce’s Pet Pantry. Bob never knew a stranger, could talk to anyone and knew everyone. He was a longtime member of Trinity United Methodist Church where he loved to sing.

Music was a big part of Bob’s life and he instilled that love in his children. He enjoyed singing in the church choir and even directed the choir for some time. He was first chair trumpet player in his youth and played taps for military funeral honors for many years. He had traveled overseas as a member of Music Makers and was often asked to sing for weddings, funerals and even sang to Joyce as she walked down the aisle during the processional at their wedding.

Those who will miss Bob’s songs the most include his wife, Joyce Haney of Winona Lake; sons, Greg (Jane) Haney of Indianapolis and John (Dawn) Haney of Fort Wayne; daughters, Anne (Dave) Bonewitz of Warsaw and Paige Haney of Winona Lake; 10 grandchildren and 19 great-grandchildren. Also surviving are two brothers, Paul Haney of Winona Lake; Dr. Ben Haney of Almont, MI; and Margaret Palmer of Rome, NY. Paul and Ben, veterans themselves, joined Bob several years ago on an honor flight to Washington, D.C. with son, John as guardian. Those who preceded Bob in passing include a brother, Joel Haney and Joel’s twin, a sister who passed as an infant.

Visitation will be held on Sunday, March 24th from 1 to 4 p.m. at Titus Funeral Home, 2000 East Sheridan Street, Warsaw. A funeral service, officiated by Pastor Ernie Troxell, will be held on Monday, at 11 a.m. in Trinity United Methodist Church, 832 East Center Street, Warsaw. Burial will be in Warsaw’s Oakwood Cemetery with military honors by members of American Legion Post 49, VFW Post 1126, and members of the United States Army.