To share your memory on the wall of Billy Ray Compton, sign in using one of the following options:

Print
Billy Ray Compton, age 79 and previously a resident of Winona Lake, passed away in the loving care of his family on Tuesday, June 25, 2019 at 7:00 a.m. in his rural Columbia City residence.

Born on February 14, 1940 in Floyd County, Kent... Read More
Billy Ray Compton, age 79 and previously a resident of Winona Lake, passed away in the loving care of his family on Tuesday, June 25, 2019 at 7:00 a.m. in his rural Columbia City residence.

Born on February 14, 1940 in Floyd County, Kentucky, Bill, as most knew him, was the son of Albert and Lucinda (Justice) Compton. He was a Dalton Foundry retiree with more than 38 years dedicated to the company. Bill primarily worked in painting.

On January 21, 1966, Bill was married to the former Nolene Shepherd. The pair shared nearly forty years before her passing on November 26, 2007. To their union four daughters and one son were born.

Bill enjoyed fishing, mushroom hunting, playing video games and tinkering – he was always working on a project. He had a good sense of humor but could be quiet at first. He was fun loving, always good for advice and very easy going. He was previously a member of Northern Little Dove Regular Baptist Church.

Friends may gather with family at Titus Funeral Home, 2000 East Sheridan Street, Warsaw, on Friday, June 28, from 10 to 2 p.m. Beginning at 2 o’clock, Bill’s life will be remembered by Pastor Luther Bailey of The Free United Baptist Church, Pierceton. Burial will follow in Oakwood Cemetery.

Memorials may be directed to The Free United Baptist Church with envelopes available at Titus Funeral Home. Condolences may be left online at www.TitusFuneralHome.com

We encourage you to share your most beloved memories of Billy Ray Compton here, so that the family and other loved ones can always see it. You can upload cherished photographs, or share your favorite stories, and can even comment on those shared by others.

Posted Jun 28, 2019 at 01:24pm
I am very sorry for your loss. My heart goes out to you in this difficult time. I hope you may find comfort at Revelation 21:4, “And he (God) will wipe out every tear from their eyes, and death will be no more, neither will mourning nor outcry nor pain be anymore. The former things have passed away.” We can look forward to the time when God will take away all reasons for distress and he even gives us a hope of a resurrection. (Acts 24:15) I hope this promise brings you comfort as it does me.
Comment Share
Share via:
F 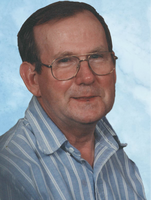