To share your memory on the wall of Florence Holman, sign in using one of the following options:

Born on March 14, 1937 in Mt Clemens, Michigan, Florence was the daughter of... Read More
Florence M. Holman, age 82 and a longtime resident of Warsaw, passed away on Friday, March 22nd just before 2 p.m. in Elkhart Place Assisted Living in Elkhart.

Born on March 14, 1937 in Mt Clemens, Michigan, Florence was the daughter of Henry and Clara (Hempke) Geisler. She was a 1956 graduate of Mt Clemens High School and was married to John W. Holman on March 31, 1958 in Mt Clemens. The pair would share more than fifty years together before his 2009 passing.

Florence had a strong work ethic and was employed by Zimmer for many years. She worked in production as a grit blast operator. She had also worked as a secretary for a local law firm (now Miner & Lemon) for some time.

Florence enjoyed reading and was especially fond of romance novels. She was an animal lover at heart and enjoyed traveling with her husband, John. New England became one of Florence’s favorite places to visit. She also enjoyed reminiscing as the pair travelled through parts of Michigan which reminded her of the family home place. Florence was a woman of strong Christian faith and was previously a member of First Baptist Church of Pierceton.

Those who survive include son, Robert Holman (wife, Vicky) of Elkhart; daughter, Pamela Reed (husband, Brandon) of North Webster and two grandchildren, Ryan Holman and Emma Holman. She is also survived by a host of nieces and nephews. In addition to her husband, John Holman, Florence was preceded in death by daughter, Kathy Holman and six siblings: Wimer, Leona, Alvin, Lorraine, Margaret and an infant brother, William.

Receive notifications about information and event scheduling for Florence

We encourage you to share your most beloved memories of Florence here, so that the family and other loved ones can always see it. You can upload cherished photographs, or share your favorite stories, and can even comment on those shared by others.

Posted Mar 28, 2019 at 03:16pm
I really enjoyed working with Florence at the Rasor Law Firm for many years. She helped train me and was always such a sweet kind person. Jill Miner 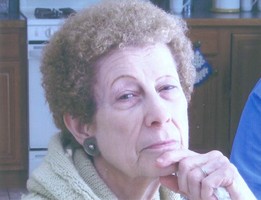